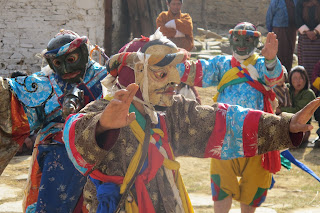 He was the only son of Nyo Gyelwa Lhanangpa who is one of the most earliest Buddhist scholars and practioners to have established monastic school in the country.  His father was the first buddhist scholar who have intrduced first establishment of Buddhist monastic complex in the territory of Bhutan by establishing Chelkha dzong in late 12th century, which is also considered as the first dzong in Bhutan.


Kangsoel roughly translates as the offering and appeasing deities that guards the tradition, teaching and practitioners of Buddha dharma.

Going by the ritual texts, one finds phrases praising the deities of kilaya and also briefing them on their roles and responsibilities, reminding them of their duties as obliged to protect the Kilaya tradition and practices for the benefit of sentient beings.

Among the diverse tradition of mask dances in Bhutan, the Tsen cham, which is also known as the Taacham(horse dance) a major mask dances performed during Kangsoel is probably the earliest Buddhist mask dances of Bhutan.

Ta-cham or the horse dance is the dance of the Sumthrang's local deity sumthrang draktsen known as the Lhatsen Dorji Draduel and its attendents that guard the sumthrang's monastic tradition and its practices laid by the incumbent linages.

On the first day, Tsen Cham (Draktsen Dance) is performed inside the Temple. The dance comprises of Draktsen the main figure of the dance surrounded by his attendants the kings of four directions.

These four kings accompanying deity Lhatsen Dorji Draduel or locally known as Meme Draktsen is different from those popular four kings we see in other mural paintings, which is known as Gyelchen Rigzhi. Four kings of Sumthrang taacham dance ride a horse each and carry different items unlike the Gyelchen Rigzhi. 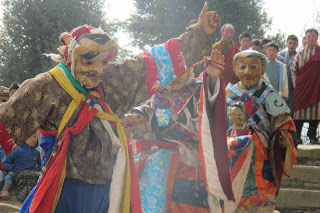 On the second day, Taacham (horse dance) is performed in the court yard, which is the same dance as performed in side the temple but with only four kings and its attendants with aextended choreographi steps of the dance.

Its history of origin
Tsencham was a dance, once performed by the same characters to one of the incumbents of the monastery. And it is loosely known as the treasure dance since it was originally performed by non-human spirits to a human who collected the steps through illusionary vision of witnessing the dance.

Both the brothers received the Nyo tradition of Kilaya teachings and took turn to take care of the family seat as the Choje. But since they never received teachings of other traditions, Jamyang Drakpi Yoezer took off a time to explore other tradions, where he met Rigzin Goethgi Demthruk ༼རིག་འཛིན་རྒོད་ཀྱི་འདེམ་ཅན༽ in Drakar Tashiding now in Sikkim, India. It is believed that one can find his foot print some where in Drakar Tashi Ding even today.

Jamyang Drakpi Yoezer, after he returned home from Drakar Tashiding had a plan to head for Tsari to continue his practice of the teachings he received from his father and his great master Rigzin Goethgi Demthruk.

At that time, the local deity with his attendants, appeared unconcealed to the Choje and requested to stay back at home to take care of the monastery and its traditions to which the Choje consented.

Then the Lhatsen Dorji Draduel and his attendants were said to have performed the dance to celebrate the joy of having their Choje consenting to their request. 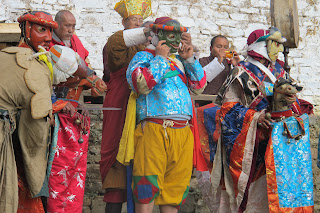 Since then the Tsencham, later known as tacham (Horse dance) is included in the annual Kangsoel with steps of the dance picked up by Choeje Jamyang Drakpi Yoezer as he witnessed these faithful deities perform it at their joy before him.

After Jamyang Drakpi Yoezer stayed back at home, Tenpi Nyima took the opportunity and left for Tibet to peruse further study and received teachings to enhance his practice of Mahayana Buddhism.

He returned back and had a residental monastry built at Goen Langdrang where he lived with his own circle of  disciples, not far from the main Sumthrang seat. His deciples one day requested him to get married in order to leave a  dungsey (linage son).

Both ani Drupthob and Dhondrup Zangpo at their later age had returned back to their main home of Sumthrang and their remains of holy body is still preserved in Sumthrang Temple.
Posted by Unknown at 8:47 PM 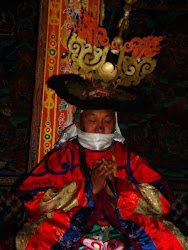 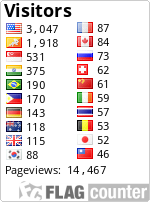